What’s the difference between EDI and Punchout? 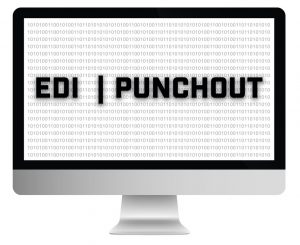 EDI and punchout are both forms of transacting between businesses, but they have very different purposes.  EDI or Electronic Data Interchange allows businesses to exchange information over a digital channel.  EDI is typically used to send data such as purchase orders, invoices and advanced shipment notifications.  It’s an older technology than punchout and has been used by businesses for over 30 years and shows no signs of going away.

The exchange of EDI documents is typically between two different companies.  Because EDI documents must be processed by computers rather than humans, a standard format must be used so that the computer is able to read and understand the documents.  There are several EDI formats including X12 and Ansi format, but in practice most organizations deviate from the standard so mapping often needs to be adjusted on each implementation.

Punchout and eProcurement started with a standard and while each organization does vary their standard slightly, most adhere to either the cXML or OCI variations.  New eProcurement platforms are launching every year, and almost all of these platforms follow the standards of cXML or OCI.

Punchout differs from EDI by offering a shopping experience to the user that EDI does not offer.  EDI has price files that can be exchanged such as an EDI 832, but no interactivity.  This is more a price list for a user to load into the system and no updates occur until the next file load.  With punchout the user can shop, return a cart and also issue a PO (which EDI does have).  Supplier can also invoice back to a procurement system as part of the process.   With the right connector, virtually every eCommerce platform can create a punchout connection to any eProcurement system.

Often, the two technologies mix and some pieces are the newer technology of punchout to let the user shop, but purchase orders and invoices are sent via EDI.  The biggest difference between the punchout and EDI is that the Punchout focuses on the shopping integrations, and EDI is centered around data transfer.

Get the book that all our customers get! Unlock the secrets to punchout catalogs and e-Procurement. 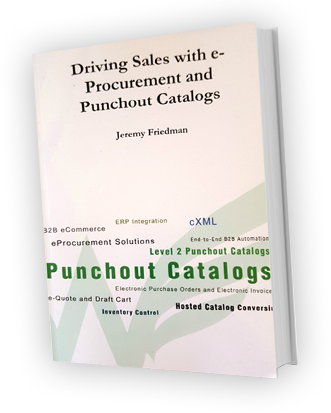